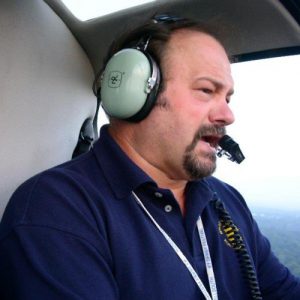 Mark Travis grew up in the late 60’s and early 70’s in Taylorsville Kentucky. Travis worked on the family farm and always dreamed of becoming a radio announcer.  He grew up listening to the Louisville station’s WAKY and  WKLO for rock and roll, WINN for country and WHAS for news and information.  He talked his father into letting him install radio’s on the farm tractors so he could listen while he worked.  Then in 1979 he was able to get his first radio station job at WCND in Shelbyville.  He had a good grade point average in school and was able to go to school  half a day his senior year then drive to Shelbyville and work on WCND then drive back home to do his farm chores.

Mark graduated in 1981 and attended the University of Kentucky and majored in Telecommunications.  After college he worked at several radio stations throughout the 1980’s and was hired by WHAS radio in 1993.  Mark was the helicopter traffic reporter and stayed in that position until budget cuts did away with his job in 2006.  Mark “retired” from radio after that and started his own production company and records commercials for different companies to this day.  In the spring of 2007 Mark ran into his longtime friend Elmer Bullock who started WXLN radio and after several conversations talked Mark out of retirement and now assist’s Bullock in the day to day operations of WXLN radio in Shelbyville.  Travis stated” I started in Shelbyville and finally came back home to Shelbyville”