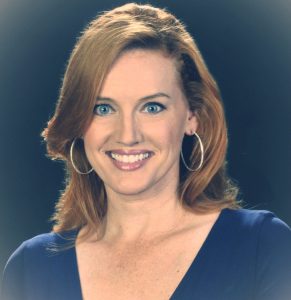 Born and raised in Shelby County, Jenny Merryman always knew she’d pursue a future in media and the performing arts. Her radio career began in 1990 as an on-air personality at Hometown Country 940AM/101.3 FM. After 4 yrs of balancing on-air duties and a communications major at the University of Kentucky, in 1994 Jenny joined another country music station – 105.7 FM. When that country station sold later in the year, Jenny left for the Army.

After the Army came marriage, motherhood and a transition from radio to television, stage and film. Jenny has been featured in many television commercials, web videos, has hosted/acted in television shows for WBNA, WHAS and TBN. Jenny has starred in independent, cable and theater films and has been a featured speaker at women’s conferences.

In recent years, Jenny has done publicity and booking for author/speaker/UofL Soccer Coach Ken Lolla, has been an announcer for the Shelby County Showcase of Bands and was the co-host of “Jim and Jenny in the Morning” at 88.5 WJIE Christian radio in Louisville.

Jenny Merryman has returned to the Shelby County airwaves. You can hear her midday’s and Saturday Morning’s on Power 93.3 WXLN and WXLNRADIO.com !!!